On Friday night, I had the great privilege of making homemade pizza with my second cousin, Brian. Jon & I took the metra to and got to experience the glory that is HOMEMADE DEEP DISH pizza… not something you do every day. While we were there, I learned that BJ (or BK, depending on what nickname you know him as) is quite notorious for his pizza.
Brian has tried to mimic his recipe from Due’s and Uno’s, although he claims that the pizza & quality at Due’s is far superior. He even got the opportunity to learn a few tricks from their kitchen to perfect his own recipe. No, I cannot reveal his recipe, but I will be able to pass along some tips and tricks that he was willing to share.
CREATE THE DOUGH
Brian invited me over to his place because he wanted to demonstrate the process of making the dough. I was hesitant at first because we were going to arrive around 6:30, and it normally takes a great deal of time to let dough rise. BUT he is quite practical and clever… more yeast + a warm oven = fast-rising dough.

How great… chunky tomato sauce created from canned whole tomatoes. I was amazed at the process of making tomato sauce since my lazy self would normally purchase it. Brian used a strainer to mash four cans of tomatoes into the strainer and then added garlic and spices

EAT IT!
The pizza was great! The crust was crunchy and bready; the tomato sauce was awesome although it could have used a bit more spice to it… minor change. I rarely order spinach & onion on my pizza, but am now completely intrigued. Overall, I ate almost two pieces of the pizza… while Jon & Brian only had 1½. I WON J My favorite part about deep dish pizza is that the cheese is hidden, and then when you cut your first bite, it oozes and tastes great. 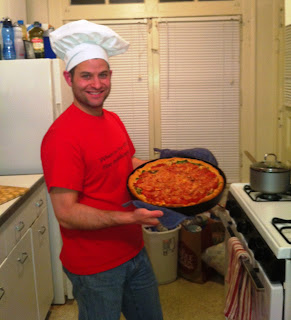 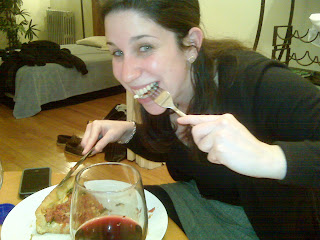 I highly suggest you take on the task of making your own deep dish pizza. It is a rewarding experience (even though I only observedJ). Although I cannot reveal BJ’s recipe, here is a summary of important tips for making deep dish.
Check out his newly created Facebook fan page and “like” it!